Bitnami makes its Helm charts available through a public Helm chart repository. The source code for these Helm charts is available in a GitHub repository, and Bitnami welcomes community contributions to this repository through pull requests.

New pull requests are reviewed (both automatically and manually), merged and published in three stages, as described below:

The starting point for the process is a new pull request in the Bitnami charts source code repository, created through the standard GitHub pull request process. The new pull request, and every subsequent commit in that request, triggers an automatic review using GitHub actions.

The first step is an automated review of the pull request using two GitHub Actions:

These lint and test operations are executed using the Chart Testing (ct) CLI tool via the Chart Testing GitHub Action. A complete log for each operation, including the commands executed and their results, is visible to the authors and reviewers of the pull request through the GitHub user interface, as shown below: 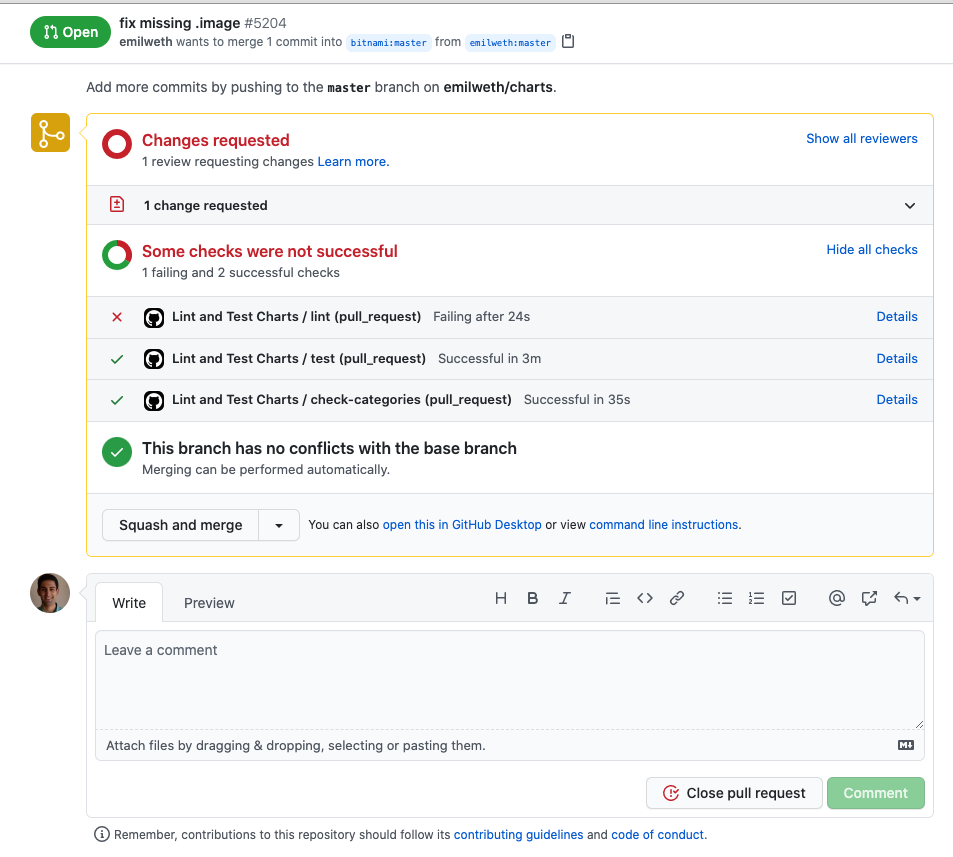 In case of failures or errors, this information allows authors and reviewers to quickly identify and debug issues and make additional commits to correct errors, as shown in the example log below:

The automated review described above is repeated for every additional commit in the pull request.

NOTE: Typically, the automatic review is completed within 5-10 minutes of the new pull request/additional commit.

NOTE: Typically, the manual review process is started within one business day of the pull request passing the automatic review.

Once the pull request successfully exits the review process, it is ready to be merged. At this point, there are two scenarios: 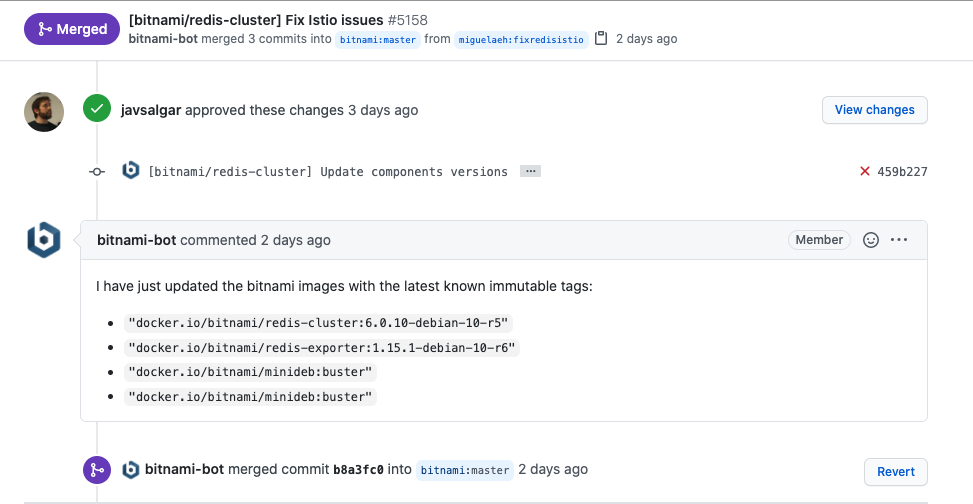 It is important to note that when the pull request is merged, it becomes part of the main branch of the Bitnami charts source code repository. However, the changes made by the pull request do not reflect immediately in Bitnami’s public Helm chart repository, as there is still one further stage in the process.

The third and final stage in Bitnami’s Helm chart release process is to publish the updated chart in the Bitnami Helm charts repository using the latest versions in the source code repository. This process is executed automatically, every time Bitnami’s internal CI/CD system detects a new chart version in the main branch.

When a new version of a chart is detected in the main branch, the internal CI/CD system triggers a set of verification, functional, and upgrade tests. Those tests are executed with the chart installed in different Kubernetes clusters (using GKE, TKG, AKS and other Kubernetes providers). These tests are mandatory; a new chart version is published only when it successfully passes all the tests.

NOTE: The test process is time-consuming because the tests are executed on multiple Kubernetes clusters and the number and type of tests varies depending on the application under review. For this reason, there is always a time lag between the merge stage (the addition of the code to the GitHub source code repository) and the publish stage (the appearance of the revised chart in the Helm charts repository). Depending on the current workload for the internal CI/CD system and the number of tests, and assuming no failures, it can take between 2-24 hours for the updated chart to be published.

TIP: If you would like to contribute to Bitnami’s chart repository, read the repository contribution guidelines and code of conduct, or learn more about the Bitnami release process and tests.